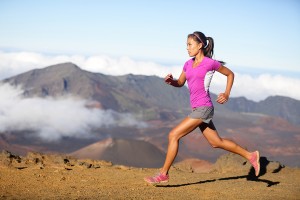 How can you get your exercise and get a mindfulness practice in at the same time? Two great things for your health now combined in one activity. Join CJ Liu as she learns from the creator of Barefoot Running, Michael Sandler, on some new meditation techniques to try while running or working out. Get a blog post at: https://www.fireitupwithcj.com/2014/08/05/813-working-meditation-techniques-michael-sandler/

Michael Sandler, former speed skater and professional level cyclist, suffered multiple injuries over the course of a lifetime, the last of which occurred just over 3 years ago. Weeks before a planned inline skating world record attempt across the country (LA to NYC) to raise awareness around ADD/ADHD, Michael experienced a life altering accident. While inline skating down Boulder Creek Trail, a father and toddler stepped in front of Michael’s path. To avoid a collision, Michael threw himself backwards and in mid-rotation, landed on concrete. The force of the impact resulted in a broken arm, broken hip and shattered femur. Doctors told him the usual story – he may not be able to keep his leg… he may not be able to walk again… he most definitely would never be able to run again. Fortunately, Michael doesn’t believe in limitations. He’ll be the first to tell you he doesn’t believe in the word, “Can’t.” Slowly but surely, through a combination of determination, meditation, trust in the universe and the power of nature, Michael became a walking miracle. In 2006, a week out of his living room hospital-bed, Michael set the record for finishing the Bolder Boulder 10K on crutches (and a broken arm). Two weeks later, Michael finished the Denver Half Marathon on crutches and became the only person to ever complete the half marathon on crutches. When he finally got off his crutches, Michael gradually worked himself into barefoot running. He was still being told he couldn’t run anymore, and with a ‘leg length discrepancy’ of over 10 millimeters, struggled to find balance and overcome nagging pain. Known as ‘Mr. Plantar Fasciitis’, as he needed custom orthotics just to walk across the living room floor, going barefoot was a major leap of faith. The first day, he ran 100 yards. Then he iced his feet for 2 days. The second time, he ran 200 yards. Then iced for another 2 days. And so it went. Today, Michael can be seen barefoot running up mountains. To Michael, barefoot running is not running at all. He says, “I don’t run anymore. I dance.”