Maybe You Want To Reconsider That Elective Surgery

Hearing the news this past week that the actress, Patty Duke, died from sepsis caused from a ruptured colon has brought attention to a potentially deadly condition that I’ve learned is on the rise. According to the Centers for Disease Control and Prevention (CDC) the number of people hospitalized for septicemia (sepsis) has increased from 621,000 in 2000 to 1,141,000 in 2008. Between 28 and 50 percent of people who get sepsis die.

There are many factors for this increase notes the CDC:

But what is sepsis? According to the nonprofit  Sepsis Alliance

Sepsis is the body’s overwhelming and life-threatening response to infection which can lead to tissue damage, organ failure, and death. Sepsis kills 258,000 Americans each year.

Medical professionals have been debating the exact definition of sepsis for decades. However, one thing they can agree upon is the origin of the disease. The word sepsis comes from the Greek meaning “decay” or “to putrefy.” In medical terms, sepsis is defined as either “the presence of pathogenic organisms or their toxins in the blood and tissues” or “the poisoned condition resulting from the presence of pathogens or their toxins as in septicemia.”

I was really surprised at how common sepsis is and how scarily easy it is to contract.  Sepsis can occur after a minor infection, even from a scrape or cut! Hospitals, where we go to get well, can be incubators for infections if you are autoimmune compromised. And think twice before getting that elective surgical procedure! According to a report by the National Institute for Health (NIH), “Sepsis remains one of the leading causes of death in the United States and surgical patients account for approximately one third of all sepsis cases.” (*)

Sepsis can also be difficult to diagnosis. Many times symptoms are ignored may be confused with other conditions. Check out this infographic:

I was pretty unclear what sepsis was when I started my research and curious to learn how it is different from a staph infection and blood poisoning. I’m still curious which is why I’ve asked Dr. Minesh Khatri, Internist and Assistant Professor of Medicine at Columbia University Medical Center, to join me on Fearless Fabulous You Monday, April 4th, 4pmEST to explain what causes sepsis, symptoms, treatment and prevention.

Meanwhile, the CDC has several helpful infographics about sepsis including this one: 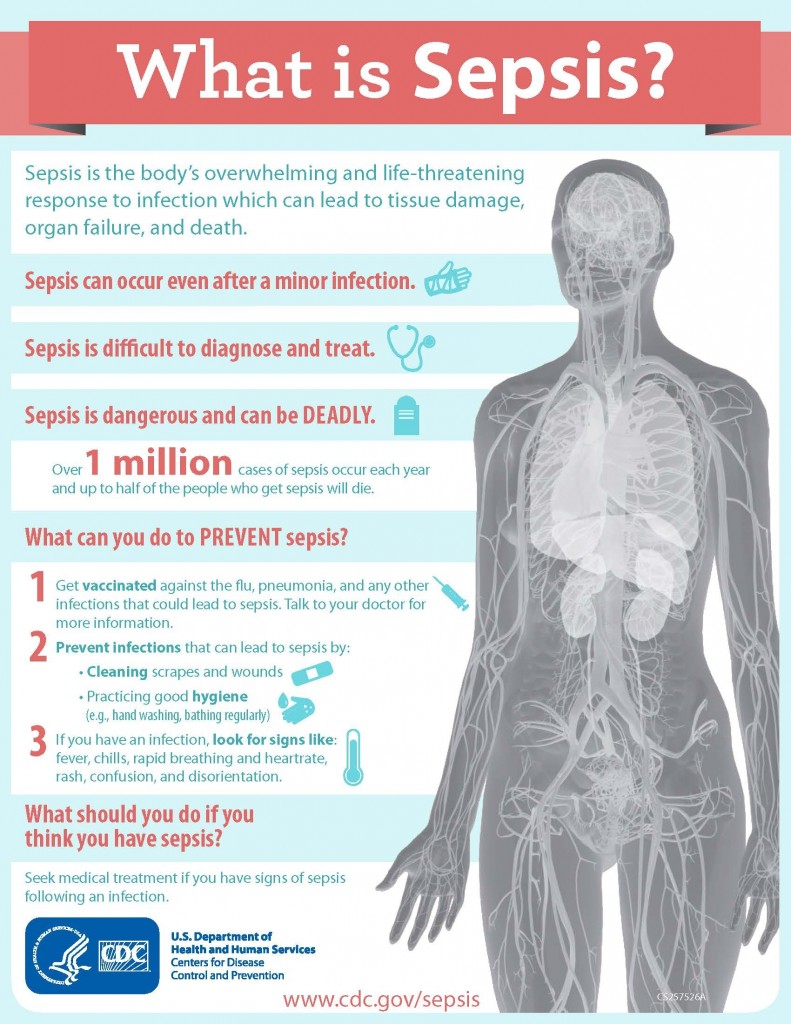